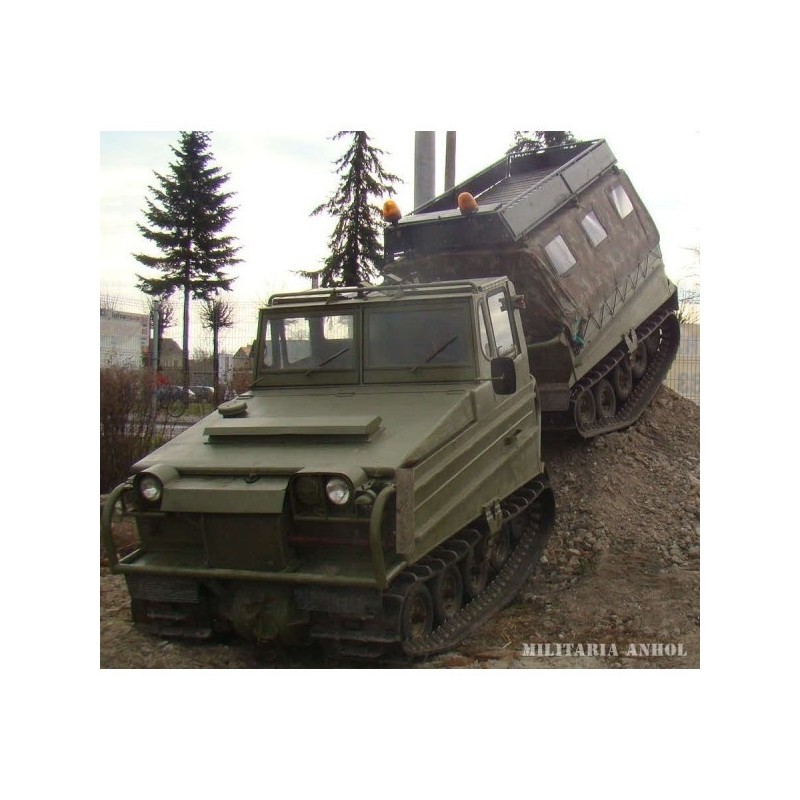 Bandvagn 202 (Bv 202) is a tracked articulated, all-terrain vehicle developed by Bolinder-Munktell, a subsidiary of Volvo, for the Swedish Army.

Military vehicle in good condition, everything is efficient and well cared for. If you have more questions, call 696 483 561. I recommend !!!

The vehicle is formed by two rubber Kegresse track units with a multi-directional pivot in between. The front unit contains the engine and gearbox through which power is delivered to the front and, via a propshaft in the pivot mechanism, the rear tracks. A hydraulic ram on the pivot "bends" the vehicle in the middle to steer it—there is no braking of track units for steering as on conventional tracklaying vehicles. The controls are a conventional steering wheel on the left hand front of the vehicle. It can reach a speed of 35 km/h on land and 7 km/h (4 kn) on water.

The Bv 202 carries a driver and a commander in the front unit and 8–10 troops in the trailer unit. It can be adapted for other applications.

The Bv 202 was designed to transport troops and equipment through snow or boglands in the northern parts of Sweden. The last Swedish unit to use this vehicle was the Cavalry, who found that the manual gearbox Bv 202 was much quieter than the automatic transmission Bv 206.

In the Norwegian army units that had both Bv 202 and Bv 206 ran the Bv 202 as the first vehicle if the snow conditions were challenging. The Bv 202 performed better in deep and/or difficult snow conditions.

The Bv 202 was used by NATO forces, and replaced the older Swedish Snow Trac ST4 Over-snow Vehicle, which was employed by the British Royal Marines under NATO.